During a TROID Seminar in 2002 entitled We Accompany the Sunnah Wherever it Goes, the noble brother and student of Imām Muqbil ibn Hādī al-Wādiʿī, Abu ʿAbdullāh Hasan al-Ṣumālī answers a question about Khālid ibn al-Walīd masjid and the speakers they promote. The noble speaker explains how they promote Sharīf ʿAbdi Nūr (refuted by Shaykh Muqbil), Ṣālih al-Munajjid (defender of Sayyid Qutb, Takfīrī, Khārijī figurehead, refuted by Shaykh Rabīʿ ibn Hādī and others), also, how the Imām (Bashir), "if you were to listen to his tapes you would think he is someone at war with the manhaj of the Salaf...not someone who is a person of ʿilm". He also explains how KBW is a masjid that propped up the speakers of Jamāʿah al-Ittihād (a political party in Somalia, built upon the principles of Sayyid Qutb and the Muslim Brotherhood, that spread discord and seperation, members of al-Shabāb evolved out of this group that was more prominent in the 80s and 90s). Abu ʿAbdullāh Hasan al-Ṣumālī makes mention of the recordings made between TROID and the scholars about Bashīr and KBW, for the people to take heed of these admonisions and to move on with the daʿwah. The speaker emphasises, "there are no Scholars in the West" and explains why they (Bashīr et al.) put down the scholars and put themselves up, calling themselves "shaykhs" on their websites and flyers, why?, "to keep your ignorant, to keep you in darkness". The speaker concludes by imploring those confused to learn the books of tawhīd, learn the books of sunnah, be with righteous companions who traverse the same path (a key point as it is often old friends and allegiances that stops people from leaving hizbiyyah). Hasan al-Ṣumālī (a Somali himself) mentions that many people will refuse to leave the hizbiyyah of KBW because "its my people," this being the trap of prefering nationalism over the truth. 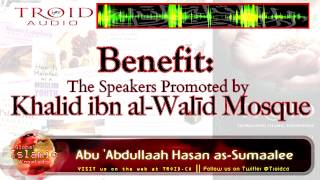